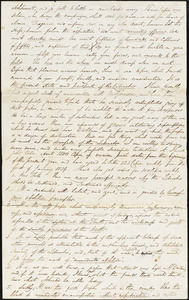 George Thompson writes to Robert Purvis in regards to him arriving safely home and hopes his family is well. Providence is watching over him in his endeavors. He hopes he will "make a noble and unreserved offering of your time, talents, and influence upon the altar consecrated to the freedom of the colored people." He discusses the prospects for the anti-slavery cause and the "present state and prospects of the Liberator." He is grieved to hear that Garrison is considering giving up the paper, "in consequence of his inability to make it pay its expenses." He provides a list of reasons for why the Liberator should be sustained. Garrison is now attempting to make some arrangements with the New England antislavery society about the Liberator. Thompson will be in New York in December to deliver an address. He will also possible be attending the meeting of the Colonization Society in Washington, D.C. He explains his travel plans in New England over the next few weeks. They have other agents joining the cause such as A. Birney and Weld.